All the territory of the Republic of Belize is part of the Mayan lowlands, so many geographical features are similar to their border regions: Petén a Guatemalan territory and at the eastern coast of Quintana Roo, and Honduras land. 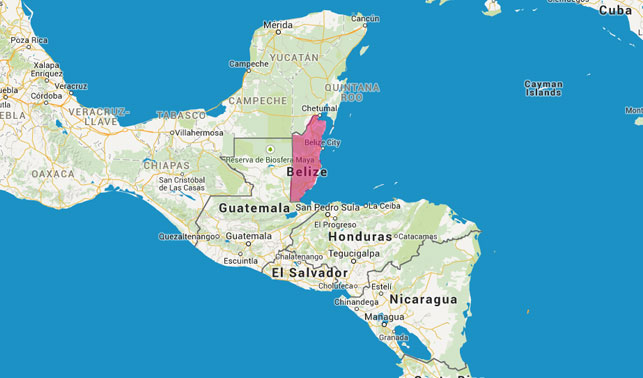 Taking into account the local geography and the pre-Hispanic cultural manifestations, you can define three areas: central Belize, which includes the District of Gaius and the Maya Mountains; the North of Belize, defined by the Bay of Chetumal and the Orange Walk District; and South of Belize, including the Toledo District and the coast of the Gulf of Honduras. The coast of Belize is a major tourist destination by own throughout the Western hemisphere's largest barrier reef, which stretches for about 185 miles. The Belize Barrier Reef Reserve System (BBRRS) was declared as world heritage by UNESCO in 1996, and includes reserves of Bacalar Chico, Blue Hole, Half Moon Caye, South Water Caye, Glover Completo Reef, Laughing Bird Caye and Sapodilla Cayes. Turneffe Island and Lighthouse Reef atolls are also important. In total, it contains more than 450 isles of sand and mangrove, which contain formations of different types of coral and therefore a unique marine ecosystem, with many species of fish, sharks, turtles, mollusks, crustaceans and other marine animals. Highlights the Blue Hole, which is a 984ft in diameter and 410ft deep well.

The population of Belize is mostly African-American, and mestizo, and only 10% of its population is of Mayan origin. Its main indigenous group is the Mopan Maya, although a small population Yukatek Maya to the North and a growing Maya K'ekchí' in the southern population, which migrated to the Belizean territory as a result of the armed conflict in Guatemala. Mopans groups are located in the Toledo District and Cayo, in communities such as Bella Vista, San Pedro Columbia, San Antonio, Big Falls, Benque Viejo del Carmen, San Jose Socotz and Cristo Rey; they have traditions and customs very similar to other Mayan groups such as the Itzá and K'ekchí's. Their ancestral forest and agricultural practices are a model for the sustainable development of the region. The community of San Pedro Columbia has a population of K'ekchí', where there are textiles and other local crafts. In the area of Placencia, Punta Gorda and Indian Creek are also crafts in the form of replicas of pre-Hispanic sculptures in Slate, masks and other objects of wood, textiles, baskets of jipijapa and necklaces of seeds, beads of clay, shells, and various minerals. The southern region of the country is also a major producer of cocoa, so that various products are produced.

The Central area of Belize is characterized by a jungle environment and the presence of the basin of the Belize River, which divides the country into two halves. South of this area are the Maya Mountains, locally known as Cokscomb, whose elevation in the Victoria plateau reaches over 3,674 feet above sea level, although the average elevation is 1,640 feet. In the Highlands you find foggy parts of the forest, although most of the area has forests of tropical pine on the Mountain Pine Ridge reservation, which grows along with the areas of rainforest region, whose height varies between 82 and 75 feet.