The archaeological site known as Joya de Cerén is undoubtedly the most important of El Salvador, since in 1993 he was named world heritage by UNESCO. This is a small residential site of the classical period, located just 3 km northeast of San Andres, so it formed part of the population of San Andres. The relevance of Joya de Cerén is that the site was buried by the eruption of the volcano Loma Caldera around 650 A.D., by what has been called the “American Pompeii”. Their structures made of mud and clay was covered by more than 6 m of volcanic ash, although they were empty, since the population had time to leave the area before the signs of an imminent eruption. However, the abandonment was fast and they left their belongings in place. Site was discovered incidentally in 1976 during the construction of a few silos, and investigated since 1978 up to the present day. Many perishable, and organic materials that are not kept under normal conditions, was carbonized and left their footprints in the ash, so have been filled with plaster to be analyzed and displayed. In addition, whole crop fields, also buried by ash, and located close to dwellings and other associated structures have been discovered. So far, there have identified 11 structures distributed in four areas or groups, all aimed at 30° NE.

Area 1 includes the structures 1, 6, 10, 11 and 12; Area 2 contains structures 2, 7 and 9; and structures 3 and 4 make up each one a separate area. Structures 1 and 2 have sidewalks, so have been interpreted as bedrooms. Structure 3 is the largest; it has a basal platform and two cameras, one of which has two sidewalks. It has been interpreted as a communal house or as a residence of the elite, which can also be applied to the structure 13, of similar characteristics. The Structure 6 is one of three wineries, which are characterized by a very simple architecture that combines clay and reed walls. Inside, pots, grinding, stones have been found also stone tools and even remains of animals such as mice and a duck. The structure 9 is a bath of steam and certainly the most impressive building in the site, since it is one of the best preserved in Mesoamerica. It is composed of thick walls of mud, interior seats and a roof in the shape of a dome, which possibly was in turn covered by a thatched roof. Another relevant aspect is the presence of a hole that could work to control and regulate the temperature inside.

The structure 11 is a circular kitchen which had walls of reed and a fire place made by three stones on the floor. The interpretation is supported by the presence of pots and other vessels for cooking and storing food, as well as a grinding stone and remains of jugs. The structure 12 is characterized by having a basal platform and two rooms with decorations in the form of windows blinds and remains of mural painting. It has been interpreted as the residence of a shaman. The organic remains have identified a wide variety of plants of consumption: corn, beans, cassava, pumpkins, peppers, taro, cotton, agave, achiote, jocote, guava and cocoa. In general, all data of Joya de Ceren have provided the closest thing that you have to the understanding of the rural population that inhabited the Valley of Zapotitán in the period late classic.

And so Heart-of-Sky says, “Our work is going well”. 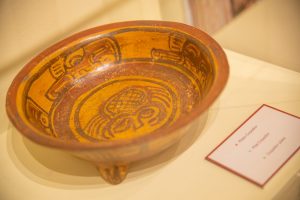